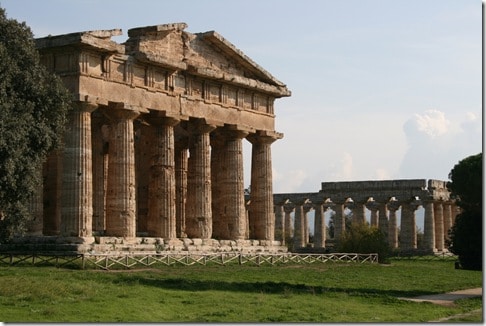 The Cilento national park is famous for its proximity to the great Greek temples of Paestum and then for white figs – and of course for its wonderful genuinely wild interior. It is not famous for wine. That hasn’t stopped a handful of family wineries proving the potential of the area if you have the commitment and above all the imagination. 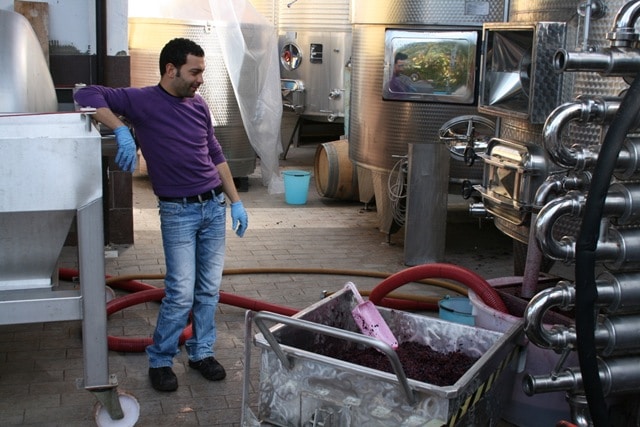 The de Conciliis family are originally from Spain and have really only been in the fine wine business for ten years.  Deeply committed to the area, they are showing what is possible and enjoying the fact that there are few rules down here, well away from the main wine-producing areas of Campania.   They love music – the last gasp of the late picked Aglianico was being processed by the young workforce to the sound of rock music at full blast. 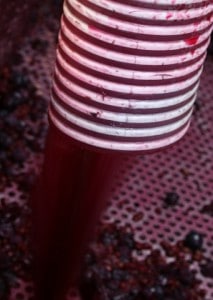 Wineries have only two tempi – still and frantic.  Often you when you visit they are silent and calm.  During the harvest and immediately after they buzz with sound, presses whirring, pumps turning over, water being sprayed for washing down, humans clattering about in what appears a semi-chaotic scene.   And through all this, emerges first the vibrant young wine, then in the silence of the cellar the wine maturing, the clink of the bottling line, the sound of the cork being drawn and eventually the wine in the glass – we hope ready to show its stuff to the best.

Bruno de Conciliis works mainly with two local grapes, Aglianico of course and, for white, Fiano, another ancient grape of Campania. Out of these, he produces a 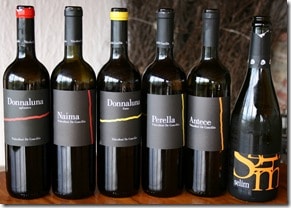 great range of wines, including a completely off-the-wall sparkler.  The tasting here was generous in the extreme.  We started with the sparkler, made from 60% Aglianico picked very early before the grapes turn red and 40% Fiano – some years it comes out with a pink edge because of the presence of the red variety but 2008 wasn’t one of those.  The literature also cites another red grape, Piemonte’s Barbera.  It is an excellent wine, made with the Charmat method (ie secondary fermentation in tanks) up north in the Prosecco area but kept there for a massive 100 days, producing a delicious white sparkler of good acidity (offset by some residual sugar), some yeastiness, and substance.

The Fiano grape makes wines of some elegance but again substance – pear and dried apricot on the nose, then nuts.  The best have a satiny feel in the mouth.  The basic white, Donnaluna 2008, is held on its skins for a night at a low temperature and then left to its own devices – according to Bruno who was nursing an impressive swelling on his hand from a wasp sting.  He believes in letting be, even in ‘dirty wine’, to allow interesting things to develop. The musical theme continues with musing on whether the wine was more Bach or Mozart.

The jazz theme really gets going in the single-vineyard Fiano, ‘Perella’, which sounds like a perfectly good Italian vineyard name until you realise the pun, ‘For Ella (Fitzgerald)’. 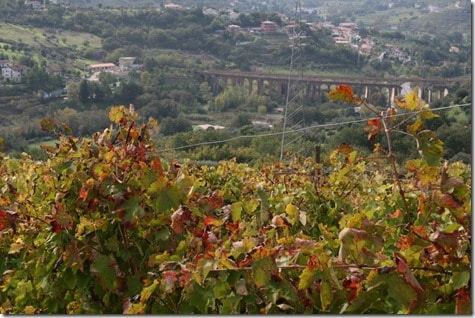 Here Fiano takes on a yet deeper mid-strawy yellow and intense aromas.  The 2008 is still too young to drink really and will only show its best from the end of 2010.  On the wild edge of winemaking is ‘Antece’, from the same vineyard as Perella, but now made as if it were a red wine  – 10 days maceration on the skins, full malolactic fermentation, made for ageing.  Antece contains no musical pun – we are back to history here as it is the word in the local dialect for the ‘ancients’, wine as made by our ancestors.  Our bottle was 2004, a deep tawny yellow in the glass, nutty, with more than a hint of marmalade.  Production of this has been cut back because there is only a small market, mainly in the States – what a shame for a singular style. We agreed that Massa Vecchia’s Vermentino, from the Tuscan Maremma, also made as though it were red, was a rare comparison.

After the Fiano masterclass, on with the Aglianico.  The ‘basic’ Donnaluna rosso is made from 12 vineyards, vinified separately and

then blended.  50% is matured in oak (nearly all old), and 50% in stainless steel. The philosophy here is only to replace 10% of barrels per year, even dismantling and reconditioning after three years, rather than mask the flavours of the grape with the vanilla of new oak.  Bruno believes that Aglianico is not noted for its obvious fruit, though the flavour is in the plum and black cherry range and spices, especially black pepper.  It has great acidity and tannin and so great ageing potential.  The other major factor is that this is not volcanic soil, like much around Avellino; rather this part of Campania was under the sea during the period of maximum volcanic activity.

The fruit from the older vineyards, 20 years and more, and closest to the sea is saved for the Naima label.  It is treated to a year in barriques or tonneaux, then six months back in stainless steel and finally released after two years.  By any standards, it is a big, dense wine.  We took a break from tasting at this point to view the vineyards with Paola and also saw the olive harvest in full flight – tractors adapted to shake the trees to release their black fruit, time-c0nsuming but precious.

Finally, we tasted the Naimi riserva, 2005, which spends 2 years in barriques (still mainly old) and then a 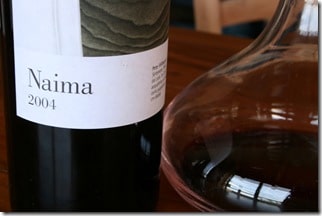 further year before release.  Even after ten minutes in the decanter, this smells of sotto bosco, the forest floor, opening out to prunes and then even violets and roses.  Indeed Aglianico has been called the Barolo of the south, not for its general profile (too big, too dark, too full-bodied) but for it floral notes above dark fruit.

All in all, these were brilliant, individual wines. Whatever the music they recall, they are a clarion call to the small and medium producer to work with the local grapes even in unlikely places, to defy expectation (sparkling white Aglianico anyone?)  and to celebrate the diversity of the vine. 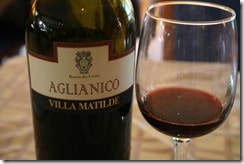 And finally, after warm thanks and farewells (the wasp sting having gone down), we eventually found lunch on the busy SS18.  In Italy, you can still just pick a restaurant at random on a main road and expect highly competent cooking.  For comparison, we tasted an Aglianico from a more conventional source, Rocca dei Leoni, owned by Villa Matilda, up near Benevento.  Dark fruit again, more obvious use of oak (coffee and leather), refined, excellent, but very different.